Around 2014, at the time when the young tea producer Shutaro Hayashi was already responsible for the processing of some extraordinary teas, but his father Osamu Hayashi was still the head of the Kirishima tea garden, there was not yet a storage for sales to Europe. But, step by step the interest in especially the very high-quality teas from Shutaro Hayashi also grew in Europe. Therefore, Shutaro Hayashi exported a small amount of his teas to several tea shops in Europe, as well as to other places in the world.

In the years 2015 and 2016, the popularity of the high-quality teas from Shutaro Hayashi and his Kirishima tea garden grew rapidly, especially in specialized tea shops in Europe. Taking the growing number of many small shipments to Europe into account, Shutaro Hayashi decided in 2016 to found a subsidiary with a storage in Europe. Since this plan of Shutaro has become reality, it is not necessary any more, to make many small transports from Kirishima to the specialized tea shop in Europe, but only three or four bigger transports to Shutaro’s storage in Europe are enough. This does not only mean, that transportation costs can be saved, but also that the organic certification for the market in Europe has not to be done many times per year, but only for these few bigger transports. Furthermore, now the customers in Europe can order from the storage in Europe, and benefit from very short delivery-times, meaning not some weeks but only a few days to receive the teas.

Now, around two years after the founding of his storage in Europe, Shutaro Hayashi is happy to be able to come to Europe usually around two time per year. This is Shutaro Hayashi’s groundwork to keep a deep connection to his customers in Europe. At his visits in Europe, Shutaro Hayashi cares not only for his direct customers, like the wholesalers in different European countries, but also the private people loving his teas. His European subsidiary “Kirishima UG” has all his traditional high-quality teas on stock, as well as many new sorts of organic Kirishima tea that Shutaro developed in the last two years. 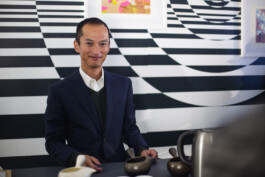