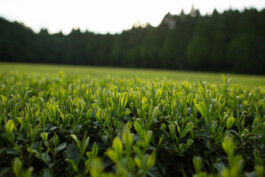 The first seeds of tea bushes arrived in Kirishima, in the very south of Japan, around 1320. These seeds were brought to Kirishima by a Buddhist monk who come from a place not far away from Kyoto, one of Japan’s ancient capitals. Namely, this monk brought the first tea seeds from the Buddhist temple “Hannya-ji”, which was founded in the year 629 and is located in Nara.

At this time all tea cultivation was done without agricultural pesticides and fertilizers, how they finally became commonly used in agriculture all over the world in the mid of the 20th century. From the time of the first tea plantations many hundreds of years ago until the mid of the 20th century, in this sense all tea gardens were cultivated in harmony with nature and the environment. Seen from this perspective, only this historical way of tea cultivation could be called “traditional way of tea cultivation”.

The tea seeds from the temple in Nara brought by the Buddhist monk to Kirishima around 1320 were fundamental for the foundation of the first tea gardens in Kirishima in the 14th. They are the roots of today’s traditional tea cultivation and production in Kirishima, which began 700 years ago. Around 580 years after these first seeds of tea bushes arrived in Kirishima, the Kirishima tea garden of Hayashi family was founded. 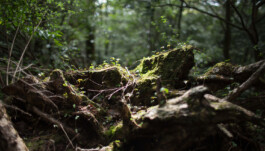 At the time, when Kisuke Hayashi founded the Kirishima tea garden, there were not yet enough people in Kirishima who had enough experience as professional tea rollers. The only way to find a way to process the freshly harvested leaves was to find people in Shizuoka prefecture and to bring them to Kirishima. But, because Shizuoka prefecture is around 1.000 kilometers north from Kirishima, which is located in the very south of Japan, it was a long trip for the professional hand-rollers to come to Kirishima. Therefore, Kisuke Hayashi promoted the technique of hand-rolling in the region of Kirishima. At the time of founder Kisuke Hayashi, the Kirishima tea garden had a size of two hectares, which was probably one of the biggest tea gardens in Japan.

Seen from nowadays perspective, two hectares would be a very small tea garden. Today, two hectares would usually even be too small for a family to survive with an own tea garden and tea production. Today the usual size of a family owned tea garden is around four to eight hectares. While today’s common tea gardens have machines for harvest as well as machines for the processing of their tea leaves, at the time of the first Kirishima tea garden generation all was done by hand. Around 1900, it would not have been possible to manage a tea garden bigger than the one of Kisuke Hayashi, because all the tea had not only to be hand-picked, but also to be hand-rolled.

Teiji Hayashi, the second generation of Hayashi family after the foundation of the Kirishima tea garden, mainly worked for letting the tea garden grow step by step. While the tea garden had a size of around two hectares when it was founded by Kisuke Hayashi, the second generation let it grow to around three hectares. Even with 50 people working for a tea garden and its production, it was usually not possible to make the tea production for a tea garden bigger than two hectares. Therefore, it was a very difficult task at the beginning of the 20th century to let the Kirishima tea garden and its production grow.

Seeing that it is very difficult to have so many people working for the tea garden and its production, the second generation of Hayashi family thought about finding a solution for this situation. The outcome of this is, that Teiji Hayashi established a little, wooden factory next to the Kirishima tea garden, very close to his tea garden parcels. Since this time, it was possible to do the rolling of the freshly harvested tea leaves with rolling machines in the small factory.

Haruo Hayashi, the third generation of the Kirishima tea garden, invented the prototype of the Japanese tea harvesting machine. The invention of this prototype may be seen as an important root for the type of Japanese tea, how it developed in the 20th century. This type of tea harvesting machine, which still today is used in a little modified way, is basically a big scissors on wheels. Accordingly, since this time it was possible to harvest the fresh leaves of the tea garden without having 50 people doing the hand-picking. Now it was possible to enlarge the Kirishima tea garden to 6 hectares, even without having 100 or 150 people to work there.

Right at this time, Haruo Hayashi’s son Osamu Hayashi was still young and saw the use of the pesticides in the family’s tea garden. When he was young he was not in the right position to convince his father to stop using the pesticides and chemical fertilizers, but he already had quite unwell feeling with this situation. Thinking more and more about the importance of an ecological balance, as well as the observance of the negative side effects of pesticides on the people working in the tea fields, he came to position, that tea should be produced on a traditional way, how it was still common at the beginning of 20th century. As soon as Osamu Hayashi became the head of Hayashi family’s Kirishima tea garden, he used all his energy to convert the Kirishima tea garden to a traditional tea garden, in the sense to cultivate tea without pesticides, how it had been common for many centuries before.

But this meant, that he was confronted with the situation of a tea garden, which was not any more in an ecological balance. In order to convert the tea garden to an organic tea garden, naturally it was the first step to stop using pesticides and chemical fertilizers. But this was not enough. On the meantime, the knowledge how to prepare natural fertilizers had got lost. All other tea gardens of the region used pesticides and chemical fertilizers, and no one could help Osamu Hayashi in preparing organic fertilizers. In order to produce a tea with a really good taste, it was not enough to use some fertilizers, so he had to find out how to prepare an organic fertilizer by himself, that also had the right influence on the tea bushes and their leaves, to create a good taste of his tea. 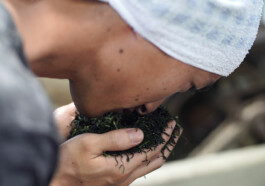 Still today, the fifth generation of the Kirishima tea garden, namely Shutaro Hayashi, is always working on preparing the best possible organic fertilizers, which finally helps the tea plants to get the right food for producing perfectly tasting leaves. While Shutaro Hayashi studied tea sciences in Kagoshima, there was no course that was about organic tea cultivation. Therefore, Shutaro had to combine the knowledge from his father Osamu Hayashi and the knowledge form his tea science study, as well as the ideas from other organic tea garden, to create the perfect organic fertilizers for his tea plants.

For Shutaro Hayashi’s tea, that became quite well-known in the last years also outside Japan, the perfect selection of the right tea bush cultivar is as important as the perfect organic fertilization. Because the organic fertilization needs much more time to get into the plants, because it works on a natural way, Shutaro has to work in the tea garden even in winter to prepare the perfect taste of his spring teas. 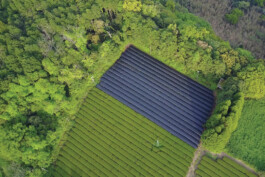